The story behind an award-winning sausage. 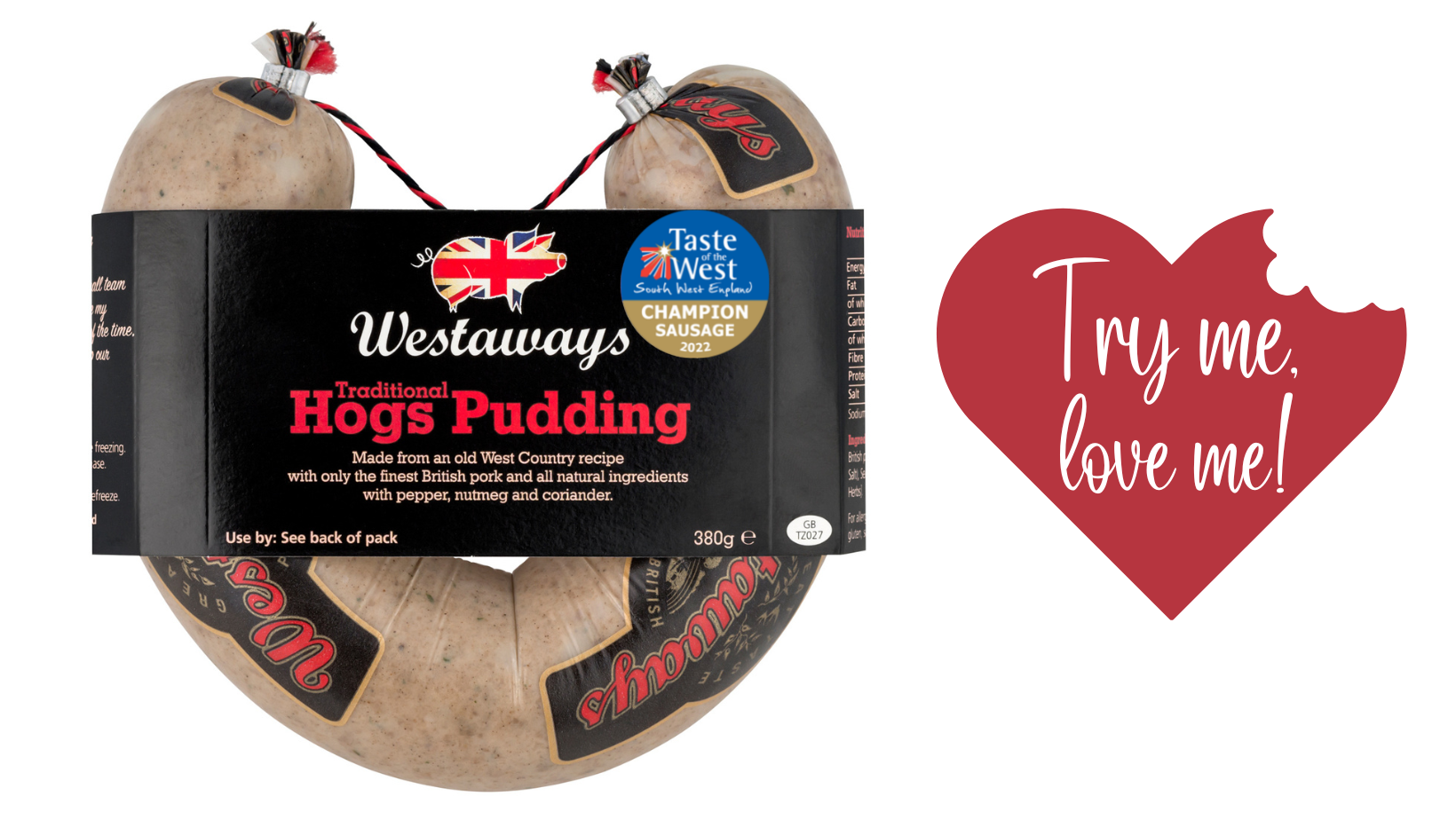 Telling the story behind a product, is the most important part of any campaign.

“A well-crafted sausage packed full of flavour and a product that should be promoted more. It’s meaty, it’s peppery, it’d go well on any full English Breakfast”

So said the Judges when they awarded our Traditional Westaway Hogs Pudding the title of Champion Sausage at one of the country’s largest Food and Drink Awards.

Farmers would kill pigs in the autumn, as this was the time when it was not so hot and there were less flies and therefore less maggots. It was then a challenge to preserve and store the fresh pork to avoid any waste. Skills such as sweet pickling, brining, air drying, and smoking produced an amazing range of tasty pork products. In the Farmhouse kitchen, it was simple enough to mince pork and fill into casing, to then simmer on the range and produce cooked puddings, or boudin as called by the French. Cooking immediately extended the life and gave a product that was flexible, and both quick and safe to use.  Farmers would call these Hogs Puddings. Every farm had its own recipe, but the principle was the same. Mince Pork, add some stale bread, some water to help mix and season to taste. Instead of Bread you could add Potato, Swede, Oats, Barley frankly anything to hand.

Our recipe for Westaways Traditional Hogs Pudding is the same as this, but we have if anything made it even simpler, safer, and more nutritious. Let me explain, 25 years ago we used to use Ox Runners and Middles as the casing. These are different parts of a cow’s digestive gut; a runner will give you a pudding in a ring as it has a natural curve, a middle will give you a straight pudding. For some strange reason the Cornish like it straight, whereas in Devon they prefer puddings with a bend!

A few years ago, I was visiting Bilboa in Northern Spain and found a butcher cooking puddings in a vat behind his shop. He was using Ox casing and had a different approach. He did not cook in fresh water like us but used a seasoned broth to cook in. This was used repeatedly and refreshed from time to time. This got me thinking, our Ox casing was causing us problems it was inconsistent, it had holes and split from time to time. Could we find an alternative casing to Ox and if so, would it be better? A few months later I was in Southern Germany and discovered a small family company producing a Polyamide casing that was a similar size to Ox Casing that could stand the temperature needed to cook the puddings without distorting, and at the same time was permeable from the outside to inside. It was used to produce cooked smoked sausages.

Back in Newton Abbot we did trials with this casing, there was no leakage of meat juices into the hot water in the tank, the casing was super clean with no fat. The airtight seal meant a vastly improved shelf life, we found we did not need to use potato to retain the juices in the pudding, and furthermore the pudding had a vibrant, fuller taste. We also could sell without a plastic tray and without an airtight overwrap. Just using a card band instead. A real sustainability win.

This was 10 years ago, of course we had a few customers who said that we had ruined a product. However, we had in our view modernised a product while keeping it totally authentic. We had cut food waste and found a new customer base for a Traditional Pork product that might otherwise have been lost and forgotten.

Gaining this award has given us an amazing endorsement from an independent group of foodies. Here is a sausage with charisma and heritage that will as the judges said “Go well on any Full English Breakfast”

Have you tried Westaways Traditional Hog Pudding yet?

Try me, and Love Me.

Available at all large Supermarkets and regional retailers throughout Devon and Cornwall. We expect to announce how you can buy online shortly.