Community is at the heart of what we do.

The majority of our sausage are sold within a 30 mile radius of our factory in Newton Abbot. Which is why it is so important that we play an active part in the community where we live and work. It is vital that we contribute wherever and whenever we can.

We are very lucky at Westaways to share and have interests in common with not just the public who live in and around Newton Abbot but also with anyone who is passionate about the environment, family life and good food.

We are the main sponsor for Newton Abbot Rugby Club.

Charles explains why we chose to be a key partner of NARFC:
“In the last 18 months communities across the country have faced considerable challenges and both family and social life has been disrupted.

Newton Abbot Rugby Football Club has shown actions and values in this difficult time that the team at Westaway Sausages wish to support and encourage. The club has sent out a clear message that it offers a welcome to all regardless of gender, age or ability, and that it is determined to add more value every year to both the members of the club, and to the local community. Westaway Sausages is proud to help the club, and is delighted to commit to a long term partnership to help the club make further progress both on and off the field.”

We donate weekly to Homeless in Teignbridge Support.

Each week our surplus stock gets collected by HITS, a local charity that provides support for people in need throughout Teignbridge.

Our sausages are turned into hot meals and care packages for those who need a little extra support. Helping tackle food waste whilst giving back to the local community.

We play an active role in Plastic Free Newton Abbot.

We have been part of the journey to securing Newton Abbot’s Plastic Free status. Our efforts in reducing plastic form our business, along with many other in Newton Abbot, have  led to the town being awarded ‘Plastic Free Communities’ status for action around Single-Use Plastic by Surfers Against Sewage (SAS).

We are proud to support Omar and Noe Araiza

They run a not for profit scheme in Southern Baja, Mexico. The Grupo Tortuguero has managed to significantly increase the local turtle population of the 5 endangered species of turtles in this remote region on the Sea of Cortez. The nesting season is now just starting and the brothers patrol a 12 mile stretch of beach looking for any turtle nests, transferring more than 30,000 eggs to the nursery for release after a 45 day incubation. 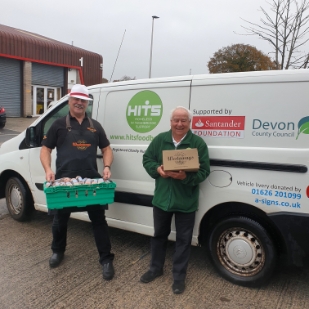